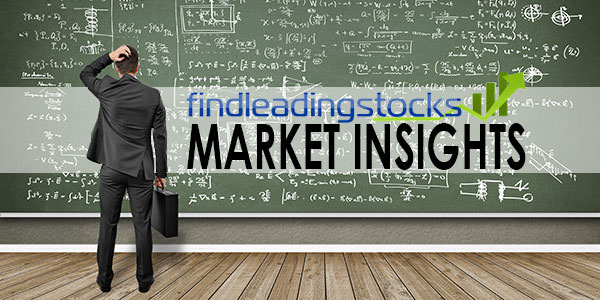 The Airline Industry Has Evolved:

The airline industry has consolidated significantly over the past decade. In addition to the massive and much needed consolidation, airlines have cut costs, become leaner, and created a new set of fees that generate billions of dollars per year in new revenue (bag fees, change ticket fees, misc fees, charging for food, etc, etc) in the past.

Oil prices plunged -54% from June 2014 high to today. Unless the airline is hedging, airline companies benefit when oil prices decline because lower fuel prices bode well for margins. While other airline stocks are acting poorly, here are a few that are acting well:

A Closer Look At 5 Airline Stocks

Alaska Air Group, Inc. is a holding company and has two principal subsidiaries: Alaska Airlines, Inc. and Horizon Air Industries, Inc. Both subsidiaries operate as airlines. However, each subsidiary’s business plan, competition and economic risks differ substantially. Alaska is a major airline, operates an all jet fleet, and its average passenger trip length is 833 miles. Horizon is a regional airline, operates jet and turboprop aircraft, and its average passenger trip is 231 miles. The stock is a leader in the group and is currently forming a bullish three weeks tight base on base pattern.  ALK just broke out above a $70.96 buy point. As long as this level holds, the stock is in good shape. 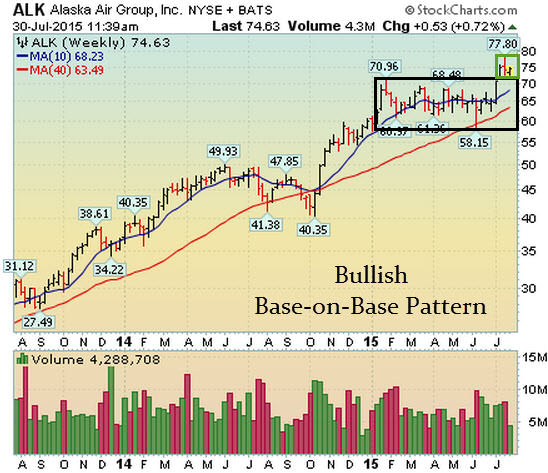 JetBlue Airways Corporation, a passenger carrier company, provides air transportation services. As of December 31, 2014, the company operated a fleet of 13 Airbus A321 aircrafts, 130 Airbus A320 aircrafts, and 60 EMBRAER 190 aircrafts. It also served 87 destinations in 27 states in the United States (the U.S.), the District of Columbia, the Commonwealth of Puerto Rico, the U.S. Virgin Islands, and 17 countries in the Caribbean and Latin America. JetBlue Airways Corporation was founded in 1998 and is based in Long Island City, New York. The stock continues acting well as it sits just above its 50 DMA line. 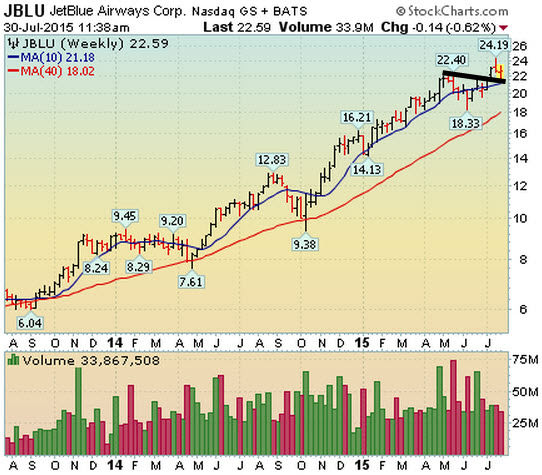 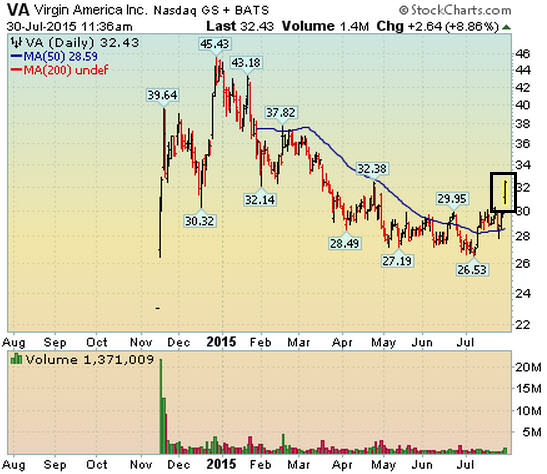 Ryanair Holdings plc, together with its subsidiaries, provides scheduled-passenger airline services in Ireland, the United Kingdom, continental Europe, and Morocco. It also offers various ancillary services, such as non-flight scheduled services and Internet-related services; and markets accommodation services and travel insurance through its Website, as well as is engaged in the in-flight sale of beverages, food, and merchandise. In addition, the company sells bus and rail tickets onboard its aircraft and through its Website; and markets car parking, attractions, and activities, as well as gift vouchers through its Website. As of June 30, 2014, it had a fleet of 297 Boeing 737-800 aircraft and 5 leased aircraft; and offered approximately 1,600 scheduled short-haul flights per day serving approximately 186 airports primarily in Europe. The company was founded in 1985 and is headquartered in Swords, Ireland. Ryanair is the Jetblue of Europe and is forming a bullish 4-week handle as it pulls into its 50 DMA line. 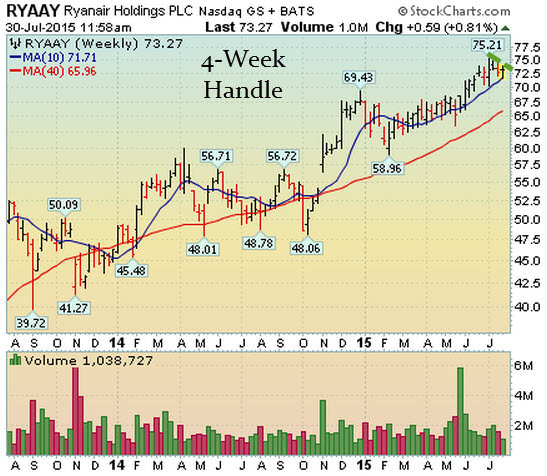 Allegiant Travel Company, a leisure travel company, focuses on the provision of travel services and products to residents of under-served cities in the United States. The company offers scheduled air transportation on limited frequency nonstop flights between under-served cities and leisure destinations. As of February 2, 2015, it operated a fleet of 53 MD-80 aircraft, 4 Airbus A319 aircraft, 9 Airbus 320 aircraft and 6 Boeing 757-200 aircraft provided services on 229 routes to 94 cities. The company also provides air-related services and products in conjunction with air transportation, including use of its call center for purchases, baggage fees, advance seat assignments, travel protection products, change fees, priority boarding, food and beverage purchases on board, and other air-related services. In addition, it offers third party travel products, such as hotel rooms, ground transportation, and attractions; and air transportation services through fixed fee agreements and charter service on a seasonal and ad-hoc basis. The company was founded in 1997 and is headquartered in Las Vegas, Nevada. In the short term the stock is clearly extended but continues to be a leader in this space. 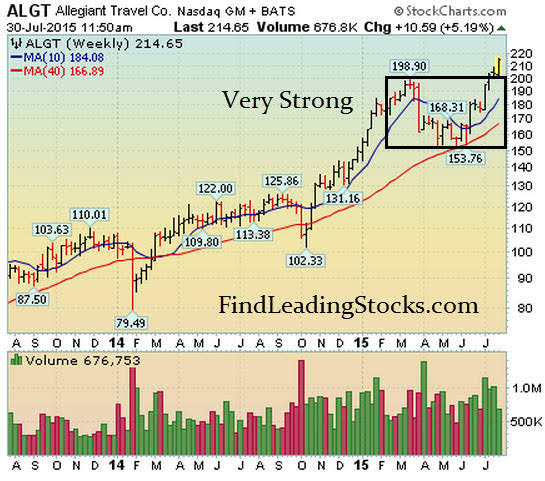