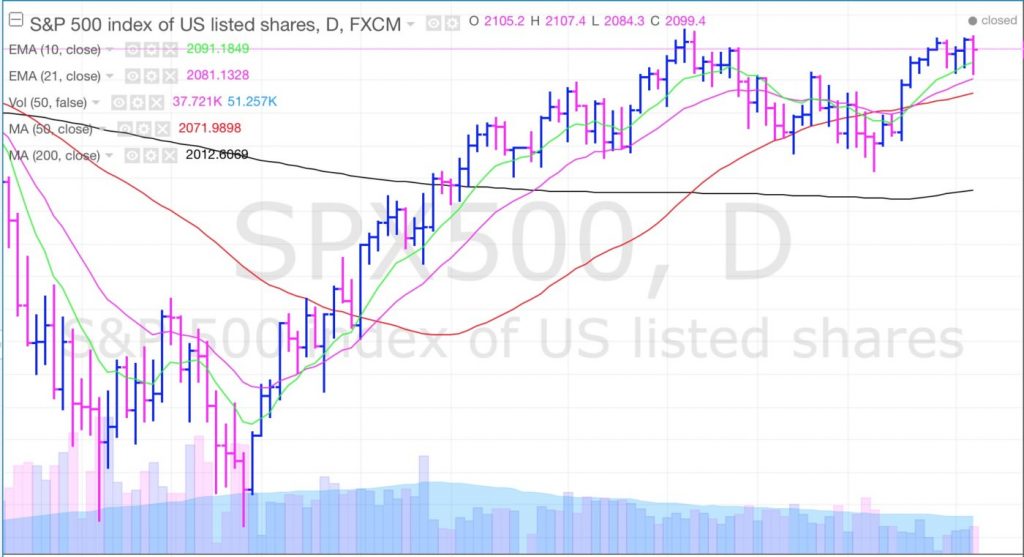 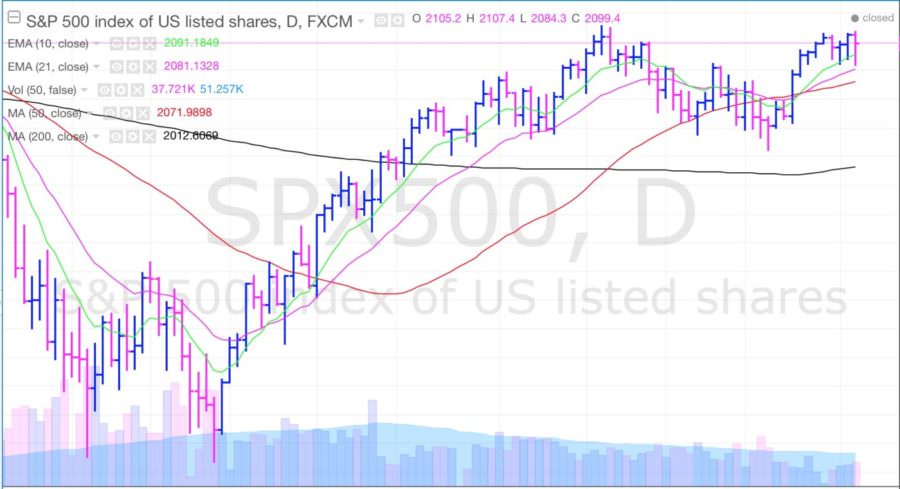 Stocks opened lower but closed near their highs after the jobs report disappointed and missed estimates by a rather large margin. We have seen this pattern all week, (open lower and close near the highs) which is a subtle but important sign of strength.

The Labor Department said U.S. employers (non farm payrolls) only added 38k new jobs in May, missing estimates for 160k. That was the weakest reading since 2010 and the narrative quickly shifted from when will the Fed raise rates, to what will the Fed do if the data weakens? The U.S. dollar tanked and bonds and gold soared on the news.

Technically, the market is trading just below resistance (2,111) for the S&P 500 and is in a trading in a rather tight range (which is healthy). The next important areas to watch for the S&P 500 are: 2,111 and then the much more important 2,134. On the downside, we are watching the 50 day moving average (2,070) and then May’s low near 2026. Keep in mind, we could enter an awkward period where weak economic data will be bullish for stocks but bearish for Main Street. Remember, the market loves easy money from global central banks but the impact is much less for Main Street.

Stepping back, the market looks like it is forming a large top (after a 7.5 year bull market) we have to respect the tape and the fact that even with all this sloppy back-and-fourth action over the past year, the major indices are only a few percentage points below record highs (which is bullish). Eventually we will bust out (move above resistance or below support) of this long (and sloppy) sideways trading range and when it does we will be ready. For the S&P 500, major resistance resides at 2,134 and major support at 1,810. We are currently trading in the upper half of this long sideways trading range which is a subtle but important signal that the bulls remain in control.

Stocks were closed on Monday for Memorial Day. Stocks fell on Tuesday as investors digested a slew of economic data. Tuesday was also the last trading day of the month and stocks rallied for the month of May. On the economic front, personal income and outlays rose 0.4% which matched consensus. The S&P Case-Shiller Housing Price Index rose 0.9%, beating estimates for 0.7%.Elsewhere, Chicago PMI rose to 49.3, missing estimates for 50.7.  Consumer confidence came in at 92.6, missing estimates for 97.0. The Dallas Fed Manufacturing index plunged into negative territory, falling to -13.1 from a positive 5.8. Finally, the State Street Investor Confidence Index fell to 106.6, lower than the last reading of 108.6.

Stocks opened lower but closed near their highs on Wednesday as investors digested the latest round of economic data. Overnight, China said the Markit Caixin manufacturing PMI slid to 49.2 last month, missing expectations, below April’s reading of 49.4, and below the boom/bust reading of 50.0 (for the 15th-consecutive month). This put pressure on international markets heading into the U.S. open. In the U.S., the Markit Manufacturing PMI rose to 50.7, beating estimates for 50.5. Construction Spending for Apr slid to -1.80%, missing estimates for +0.60%. The ISM manufacturing index came in at 51.3 in May, beating estimates for 50.50 and higher than the prior reading of 50.8. Auto sales fell which hurt sentiment. GM said sales plunged -18% last month and Ford (F) said sales tanked -5.9%. In the afternoon, the Fed’s Beige Book showed modest economic growth across the 12 districts. The fact that it was not a big miss, helped the market.

Stocks opened lower on Thursday as investors digested a slew of data. Overnight, Japan’s stock market fell over 2% which put pressure on global equities. Before the open, The European Central Bank (ECB) President Mario Draghi said inflation rates will likely stay low or negative in the near future as global growth remains sluggish. Draghi said that inflation may increase in the second half of the year and raised their inflation forecast to 0.2%, from 0.1%. Separately, OPEC concluded its latest meeting, kept their policy unchanged, and did not place an output ceiling. Crude oil fell on the news but edged higher throughout the session. In U.S., ADP said private employers added +173,000 new jobs in May which almost matched estimates for 175,000 new jobs. Before Friday’s open, the Labor Department said U.S. employers added only 38k new jobs in May, much lower than the Street’s estimate for 160k. The U.S. dollar fell hard while bonds and gold rallied. Stocks opened lower but closed near their highs which is a subtle, yet important sign of strength.

The market is trying to bounce from here as the bulls show up and do their best to defend near term support. Economic and earnings data remains less than stellar but all that matters now- is the easy money from global central banks.  As always, keep your losses small and never argue with the tape.