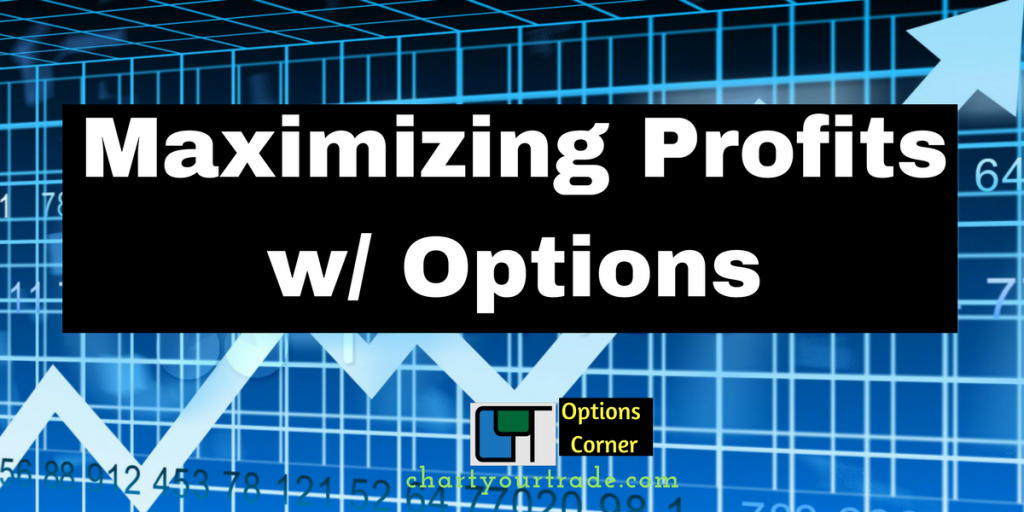 A few months ago, Michael invited me to try out the services offered here at Chart Your Trade. You can read my full review here:

Needless to say, I was very impressed as you can see from some of the results below.

Today, I want to take things one step further and talk about how traders could use options to trade some of the recommendations from Chart Your Trade.

The first example is on NKE, which was mentioned in the February 12 Elite Stock Setups report when the stock was trading at $65.50. An entry point of $67.31 was recommended.

NKE past that entry point a few days later on Feb 14th. Since then, markets have been a little volatile. In fact, since February 14th, the S&P 500 is down 4.09%. NKE is also down, but is slightly outperforming the market at -3.68%.

One of my favorite options strategies is called a poor man’s covered call. This strategy gives you exposure to the stock for a fraction of the cost and provides income potential. It’s like taking a leveraged position on the stock, so the gains in percentage terms will be magnified on both the upside and the downside.

You can read a full tutorial on this strategy here: http://www.optionstradingiq.com/poor-mans-covered-call/

Here’s an example of how an investor might set up a poor man’s covered call on NKE once the entry point was hit:

This position has a similar exposure to buying 100 shares of NKE and selling a covered call. However, in this case the investor has only had to invest $1,160 as opposed to $6,731.

Moving forward to March 23rd, NKE is down 3.68%, so the pure stock investor would be -$248 whereas the poor man’s covered call is +$21. Certainly not a home run but a nice outperformance. 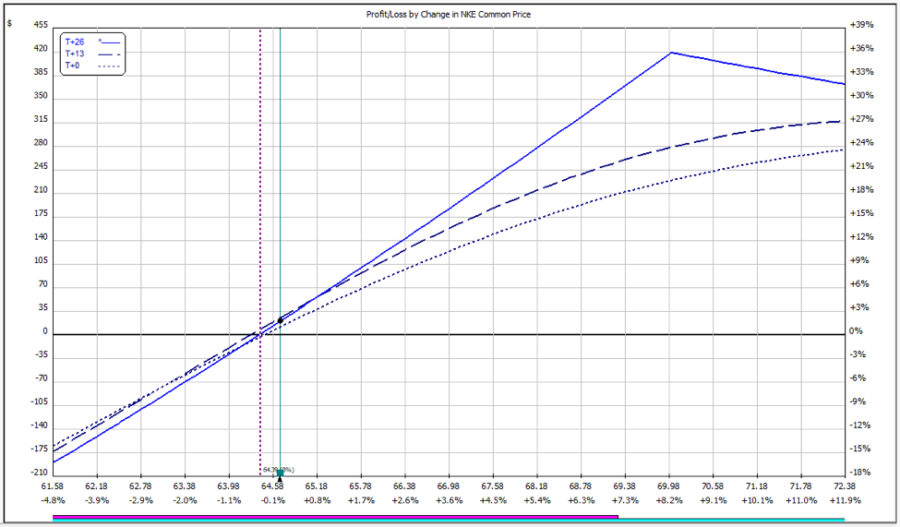 The second way to play NKE that we’ll look at is via a simple bull put spread. This is a very simple strategy and another easy place to start for those wanted to get involved in options.

Here’s how an investor might set up the trade based on the NKE entry signal:

This trade gives the investor a significant margin for error, with a breakeven point at $62.24 (a 7.53% decline) and a reasonable income potential.

It’s important to note that in this example, if NKE fell below $57.50 at expiry of the option trade, the investor would lose the full $2,370 whereas the pure stock investor would only be down $1,481.

The above two examples show how these two option trades outperformed pure stock ownership and both achieved positive returns from bullish trades, even though the stock was down nearly 4%.

Let’s now look at another example from the table posted at the top of this article.

NFLX is a favorite stock for option traders and it was mentioned in the Dec 29th version of Elite Stock Setups. At the time the stock was trading at $193.50 with a recommended entry point of $200.40.

That price was passed on the first trading day of the year giving investors the all clear to hop onboard the NFLX train.

Investors who purchased the stock would have made a 65.39% return from January 2nd through to March 9th.

Investors with a higher risk tolerance could have instead traded a long call.

This is a high risk, high reward trade that can pay off big if the stock makes a big move.

With this trade, the investor was risking $2,280 and would lose all of that investment if NFLX dropped below $185 around March 16th. But, if NFLX were to go on a huge run, which it did, the high risk trade would pay off in spades.

Considering the majority of stocks from ChartYourTrade’s Dec 29th report went on to have massive gains, traders willing to take a large risk with long calls would have done incredibly well.

Thanks to Michael and the team for all their hard work and analysis and if anyone wants to learn more about options feel free to email me at info (at) optionstradingiq.com

Gavin has a Masters in Applied Finance and Investment. He specializes in income trading using options, is very conservative in his style and believes patience in waiting for the best setups is the key to successful trading. He likes to focus on short volatility strategies. Gavin has written 5 books on options trading, 3 of which were bestsellers.