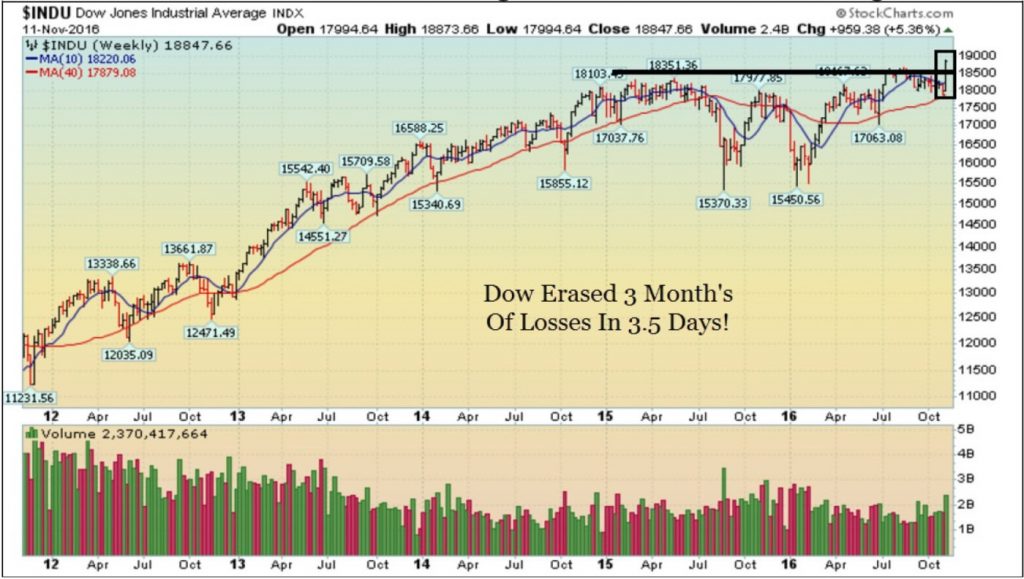 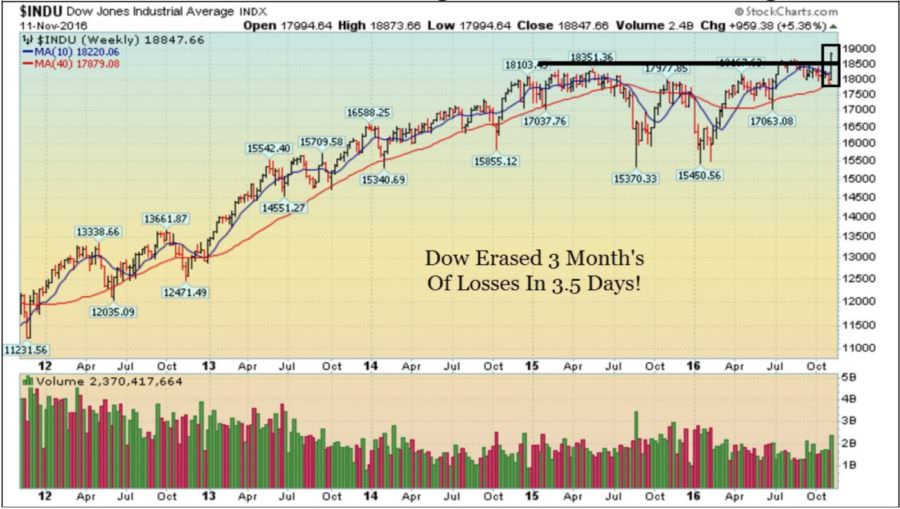 Last week was a very important week on Wall Street.  The bulls stepped in and defended major support (the longer term 200 day moving average line) and erased three month’s worth of losses in 3.5 days!  The market likes Trump’s pro-growth policies and is clearly giving him the bullish benefit of the doubt. Even large billionaire investors that were pro-Hillary are bullish on our future and are supporting Trump. The market went from being egregiously oversold to overbought in a few days. In the near term, the bulls want to see these gains hold and they want the market to stay above November’s low (200 DMA line).

The other big shift that occurred in the market last week was that leadership changed considerably. Before the election, the market was pricing in a Hillary win and the stocks that were leading were Hillary friendly. After the election, that switched. The areas of the market that were lagging (Dow & S&P 500) are now leading and the leading areas are now lagging (Nasdaq/Nasdaq 100). Unless we erase last week’s gains, weakness should be bought in the near future. Looking forward, the next big event the market will be looking at is the Fed meeting in December. 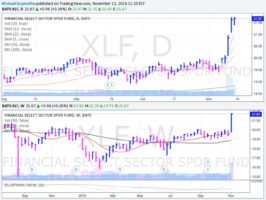 Over the weekend, the FBI cleared Hillary in the latest email scandal and stocks rallied sharply from deeply oversold levels on Monday. The market was very oversold and just finished its longest losing streak in 36 years! Technically, the bulls showed up and defended the longer-term 200 DMA line for the S&P 500. For now, that is the major level of support to watch. Looking forward, resistance resides near the 50 DMA line. Steel (SLX) stocks and Transportation (IYT) broke out above resistance on Monday as the financials (XLF) and semiconductors (SMH) remain in decent shape. They key now is to analyze the health of the bounce and see if new leadership shows up.

Stocks rallied on Tuesday as Americans cast their vote. The market opened a little lower after the latest round of earnings blowups were announced. $HTZ, $VRX, $CVS, $W, $DEPO, $TAST, and $DHI were some of the stocks that fell after reporting earnings. Buyers quickly showed up and sent stocks higher after early exit polls suggested that Hillary will win the election. Remember, Hillary represents more easy money and, at this point, markets love easy money.

Stock futures were down close to 900 points overnight after Donald Trump won the 2016 election. The massive sell-off only lasted a few hours because the bulls showed up on Wednesday and sent stocks higher. That turned into the largest single day reversal for the market since the 2008 financial crisis. 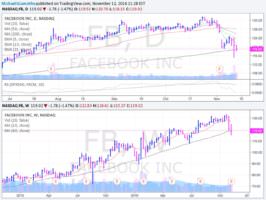 The Dow hit a fresh record high on Thursday helped by a large rally in the financials, industrials, materials and transports. The Nasdaq and Nasdaq 100 spent the session in the red as several big growth stocks remain under pressure (AAPL, AMZN, FB, FLT, BABA, just to name a few). Almost overnight, the areas of the market that were lagging (Dow and S&P 500) are now leading and the areas that were leading for the past few months are now lagging (Nasdaq and Nasdaq 100) as the market prices in a Trump victory. Stocks were relatively quiet on Friday as the market paused to digest its strongest weekly gain of the year. Oil prices fell 3% which dragged down a slew of energy stocks. Oil fell after people questioned the ability for OPEC to actually reach a deal and cut production. It’s perfectly normal to see the market pauses after a very strong move. The Dow erased 3 month’s of losses in the past 3.5 trading days! That’s a big feat.

The market soared last week (before and after) the election. That tells us that the bulls are still in control and the market will likely continue to rally for now. As always, keep your losses small and never argue with the tape.

Week-In-Review: The Market Is Focused On These Two Things Right Now