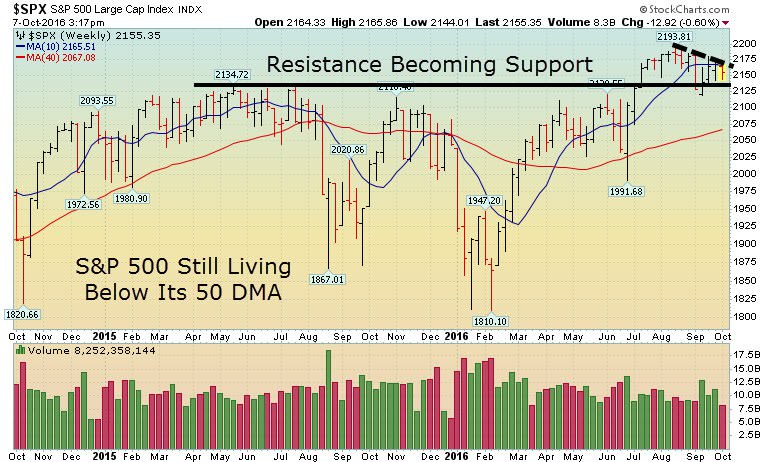 Stocks fell last week after the jobs report missed estimates for the second straight month and more and more areas appear to be either rolling over or getting in trouble.  Around mid-day on Friday, after the Dow was down a little over 100 points, Mario Draghi, head of the European Central Bank, came out juiced markets.  He said the ECB is ready to expand QE (print more money), if needed.  Talk about trying to manipulate markets!  Imagine if a CEO gave out material information to juice her stock… she’d be in jail!  Yet it’s perfectly okay when central bankers juice markets.

The Dow Jones Industrial Average and the benchmark S&P 500 are both “living” below their respective 50 DMA lines which is not a healthy sign. Meanwhile, the Nasdaq and Nasdaq 100 are above their respective 50 DMA lines, but not by much. Furthermore, a longer term look at the market shows the major indices are stalling out up here as investors wait for the Fed to raise rates. We find it a little worrisome (bearish) to see the market give back all the post Fed gains. Additionally, Dr. Yellen came out last week and said the Fed can buy stocks and corporate bonds in the next downturn. Yet, stocks couldn’t rally. If the head of the U.S. Fed is telling the world the Fed is ready to buy stocks and bonds in the next downturn- and that’s not enough to juice markets, that tells us a lot.

Bottom line, the market is not acting well right now and we want to take our time until the bulls regain control. Looking forward, we are entering earnings season and that will likely become front and center over the next few weeks. So far, even with rates kept artificially low, earnings are projected to fall for a 6th straight quarter. To be clear, if September’s lows are breached, that will be a huge negative and we will expect another leg lower to follow. On the other hand, if the Dow and S&P 500 can get (and stay) above their respective 50 DMA lines, that will be a big positive for the bulls. Until either event occurs, we have to expect this sloppy/sideways action to continue.

Stocks fell on Monday on the first trading day of the month and quarter. Economic data was mixed. The PMI Manufacturing Index came in at 51.5, lower than the last reading of 52.0. The ISM Manufacturing Index came in at 51.5, beating estimates for 50.2. Finally, construction spending slid -0.7%, missing estimates for 0.3%. Meanwhile, shares of Tesla (TSLA) gapped up after a report was released that suggested the electric car company will report a solid quarter.

Stocks fell on Tuesday after a few Fed heads suggested the Fed should raise rates as soon as November. This sent the US dollar higher and gold and other interest rate sensitive areas of the market lower on the news. Utilities, REITs, and a handful of other interest-rate sensitive areas of the market fell hard as fear spread regarding an imminent Fed rate hike. Then the selling spread after the European Central Bank, hinted it may taper (reduce) QE (print less money) before their deadline.

Stocks rallied on Wednesday as investors digested the latest round of economic data. Before the open, the composite Mortgage Application index rose 2.9% vs the prior reading of -0.7%. Mortgage rates fell to the lowest level since July and the average interest rate on a 30-year fixed rate conforming loan is 3.62%. The ADP Employment Report, which measures private payrolls data, came in at 154,000, easily beating the Street’s estimate for 170,000. The PMI Service index came in at 52.3, higher than the prior reading of 51.0. Factory orders grew by 0.2%, beating the -0.2% forecast. Finally, the ISM service index came in at 57.1, beating estimates for 52.9.

Stocks opened lower on Thursday but closed mixed after a few large M&A deals fell apart and Deutsche Bank cut an extra 1,000 jobs in Germany. Shares of Twitter (TWTR) plunged nearly 20% before the open after a report that some tech giants are not planning a bid to acquire the company. Shares of Twitter surged in recent weeks on hopes the company will be acquired. Separately, KLA-Tencor (KLAC) & Lam Research (LRCX) canceled their planned $10.6 billion merger because the the Justice Department may oppose the deal on antitrust grounds.

Weekly jobless claims came in at 249k, easily beating estimates for 256k. That strengthened the case for the Fed to hike rates. Several interest rate-sensitive areas of the market continue to fall on the news. Stocks pared the losses after the European Central Bank (ECB) minutes showed they are open to expanding QE. Earlier in the week, the market sold off after rumor spread that the ECB may taper (reduce) QE (print less money) before the original deadline.

Stocks fell on Friday after the jobs report missed estimates but rallied sharply after Draghi came out and said he is willing to expand QE, if needed. Don’t you just love this business. The U.S. government said U.S. employers added 156,000 jobs in September, missing estimates for 176,000. Meanwhile, the headline unemployment rate ticked up to 5.0%, just higher than the estimate for +4.9%. Meanwhile, August’s number was revised up to 167,000 jobs in August, higher than the original number of 151,000. In other news, overnight the British Pound experienced a mini flash-crash after it plunged 6% in 2 minutes. Fed Vice Chairman Stanley Fischer said Friday’s jobs report was “pretty close” to a “Goldilocks” number and Cleveland Fed President Loretta Mester said, the jobs report was “solid” and said it was time for the Fed to raise rates.

The tape remains very split. The fundamental driver continues to be easy money from global central banks. Economic and earnings data remain mixed at best which means easy money is here to stay. As always, keep your losses small and never argue with the tape.