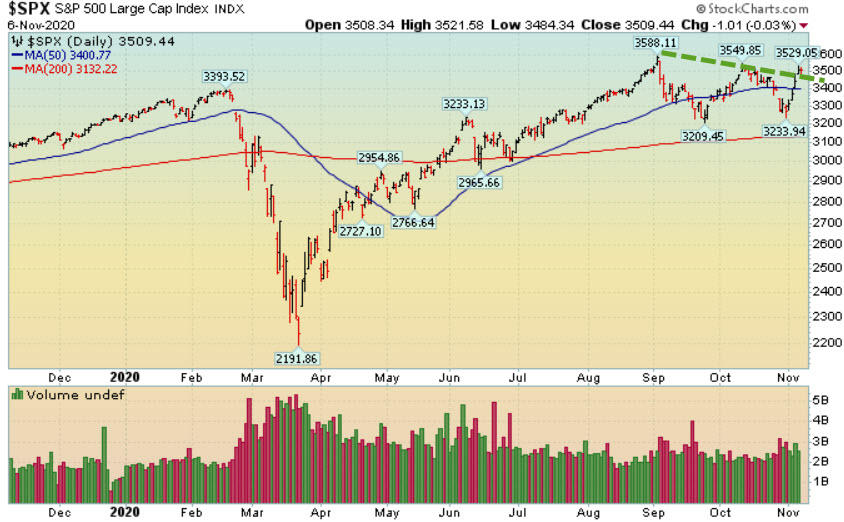 The market rallied sharply last week as the election is now largely behind us. The fact that easy money from the Fed and other central banks is here to stay is the primary driver for asset prices – right now. Eventually, that will end but until it does, I’ve learned, the best policy is to follow the Fed. The market is very strong and had every chance in the world to fall. The fact that it didn’t fall, and instead rallied, speaks volumes to how strong the bulls are right now. Remember, the big level of support to watch is September’s low and the next level of resistance is 2020’s high. I received quite a few emails over the last few weeks asking about my “stops” and why they are so wide. Remember, my goal is to capture the bulk of the move, not pick the top or bottom. That said, we are sitting on huge gains and I want to give these leaders every chance in the world to rally (and not choke them). I’m not looking to day trade, or even short-term trade, I want to sink my teeth into a few monster stocks then get out of the way and let them do what they are going to do. Does that mean periodically there may be deep “corrections” within longer term uptrends? Absolutely! And I’m ok with that because, in the right stocks, those drawdowns end, and are followed by new and very powerful uptrends that lead to new record highs.

Monday-Wednesday’s Action:
Stocks rallied nicely on Monday which was the first trading day of November. The Nasdaq was off to a nice start but briefly turned negative then closed higher in another rocky up and down day. Stocks rallied nicely on Tuesday as the country voted for the next President Of The United States. In other news, Covid-19 cases continued to surge. The seven-day average of daily new coronavirus cases hit 83,805 as of Sunday, nearly 20% higher than a week ago, according to a CNBC analysis of Johns Hopkins data. Stocks rallied sharply on Wednesday as the so-called blue wave didn’t unfold. The big reason why the market is rallying is because the election is over and that uncertainty is largely behind us. Even though we don’t have a clear winner yet the “good” news is that we can move forward and focus on other things.

Stocks rallied sharply on Thursday as the Fed basically said it plans to keep rates low for the foreseeable future. In other Central Bank news, the Bank of England fired a larger-than-expected round of easy money. The BOE announced 150 billion pounds ($195 million) of quantitative easing to help the economy as the U.K. enters further Covid restrictions and the post-Brexit relationship with the EU remains uncertain. Elsewhere, the European Union cut its growth forecast for 2021 as a second round of pandemic restrictions in the region risk putting a halt to the recovery. In the U.S., new cases came close to 100,000, as deaths and infections worldwide surged. Stocks were quiet on Friday after the jobs report was announced. The Labor Department reported Friday that nonfarm payrolls rose by 638,000 and the unemployment rate was at 6.9%. That beat the Street’s estimate for a payroll gain of 530,000 and an unemployment rate of 7.7%, which was slightly lower than September’s level of 7.9%.

Market Outlook: Flood The System With Liquidity
The bulls showed up and defended important support (September 2020’s low). Looking forward, as long as that level holds, the bulls remain in control. If all the major indices break below September’s low then odds favor lower prices will follow. Earlier this year, global governments, and global central banks, once again, stepped in with massive rate cuts and other “aid” packages to help “stimulate” both Main Street and Wall Street. That said, longer term, as long as March’s lows hold, the market will likely move sideways to higher. On the other hand, if March’s lows are breached, then look out below. As always, keep your losses small and never argue with the tape.